German Towns in Pennsylvania | Experience German Culture in the USA

German towns in Pennsylvania tell the story of the largest ethnic group in the States. More than 50 million Americans declare themselves as having German ancestry.

More than 3.5 million of them live in German towns in Pennsylvania, making it the most German American state. Many of them are completely integrated, and many of them do not speak German at all. But, some have a strong feeling of belonging to their country of origin and they make an effort to show it in the towns where they live.

German immigrants created what we call German Towns, where they worked hard on preserving their culture, history and language. Visiting those towns is like visiting downtown Munich.

Since so few of us have a chance of visiting real Germany, why not immerse ourselves in Germany on your doorstep, it’s much cheaper and just as much fun.

Did you know that Germans brought to the States the first kindergartens, hot dogs, hamburgers and even the Christmas tree tradition?

Why did Germans come to Pennsylvania? History tells us that many Germans were pushed from their homes in the 1700s and 1800s to escape drastic religious persecution.

And not only Germans. What we call today German Americans or what is also known as Pennsylvania Dutch (no, they are not Dutch from the Netherlands), came from southern Germany – Bavaria, Saxony,  Switzerland, Tyrol in Italy, Belgium, Luxemburg and other European countries where some people spoke German.

Most of them originally settled in the southeast part of Pennsylvania (today Northampton, Lancaster, Berks, Lehigh, Bucks, Montgomery, York, and other counties).

There, they were free to speak their language and practice their religion. Most were of Anabaptist faith – Amish and Mennonite, but some were German Reformed, Lutheran, Moravian and other groups.

The first Germans in Pennsylvania were farmers and artisans. They worked hard and tried to preserve their culture, religion, language and way of life. Others, especially the new generation, completely integrated and got Americanized, not even speaking their old language – German.

Having the choice in the Land of Freedom, some German Americans created little replicas of their home towns, to the delight of the visitors, German or not, with the traditional architecture, music, food and festivals.

So here is the list of the German towns and villages in Pennsylvania. Let’s kick off.

Kutztown is a small town of about 5,000 people that grew on the piece of land George Kutz bought in 1755. Most residents are of German origin and much of the town has the carefully preserved feel of the Old Country.

Kutztown is home to a group of 160 Old Order Mennonite families. They live simple life refusing modern amenities. Do not be surprised to see them riding the horse and buggy through town.

You can learn most about the history of the town at the Pennsylvania German Cultural Heritage Center at the University of Pennsylvania, and the Kutztown Area Historical Society. It is a library and a museum, located in the magnificent old Victorian building.

Try some beer made in the old German tradition at the Saucony Creek Craft Brewery & Gastropub. It goes so well with their port tots and pierogi fries.

The best time to come is in July during the traditional Kutztown Folk Festival that celebrates the local culture, arts and food.

If you are staying overnight, check the Main Street Inn, a small boutique hotel located in the center of Kutztown, a short walk from the Kutztown University of Pennsylvania campus. It occupies a beautifully restored 1870s home. 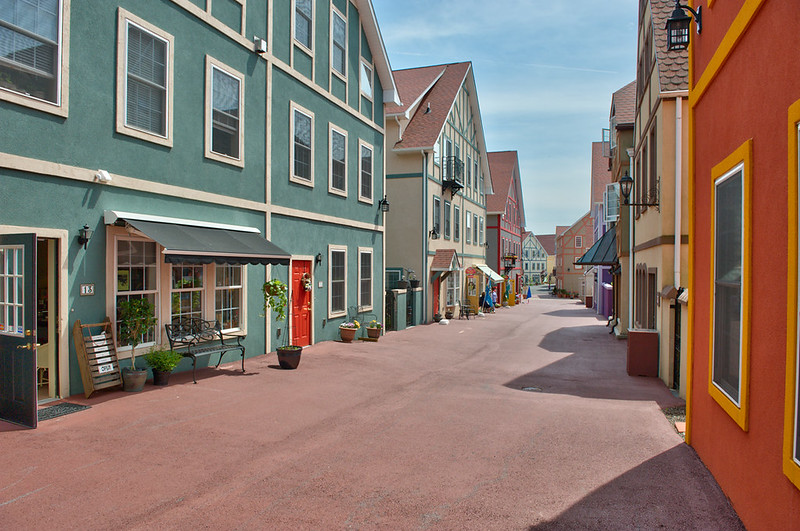 Stoudtburg Village is a private planned residential community in Adamstown designed to resemble the historic town of Rothenburg ob der Tauber in Germany.

While totally new, everything is made to look old, authentic and ancient. It is possible that you will not find a town so Old Germany even in Germany. Stoudtburg Village is considered one of the best spots to visit antique shops.

Charming quiet streets are lined with old shady trees, pubs and little shops selling everything from wine, candy and coffee to dolls, games, crafts and gifts. Check out the Robot & Music Box Museums. No cars are allowed in the village.

Stroll through the village to enjoy the quirky architecture and lovely gardens. Relax on the village plaza where the town mascot, a fountain with a cherub called “Peaches” cools the air and soothes the soul.

There are no hotels in Stoudtburg Village and unless one of the residents invites you to be his guest, you will have to look for a place to stay in nearby Adamstown.

Germantown,  located in Northwest Philadelphia, is a charming small European oasis founded in 1683 by German, Mennonite and Quaker families. Originally, it was an independent borough but was later absorbed into Philadelphia.

Do not miss the American oldest rose garden located at Wyck House and the beautiful Pink Cherry blossom trees.

The best time to visit is in summer, during the Revolutionary Germantown Festival at the Cliveden mansion, held to commemorate the 1777 Battle of Germantown, which was fought in the mansion’s backyard.

Located in Lancaster County, Pennsylvania, about 42 miles from Harrisburg, Ephrata is a small town almost 300 years old, with rich religious history and full of Amish and German traditions.

Because of its famous healing spring waters, Ephrata has always been known as a resort town. The Mountain Springs Hampton Inn and Suites is still following that tradition.

The main street really shows the town’s character, with its charming shops and taverns.

Religion has always been a big part of Ephrata’s identity. The town is home to the Ephrata Cloister (pictured above), America’s first religious communal society.

The cloister is a national landmark. Its unique art, architecture, and music, regularly attract tourists, especially during its annual events such as Apple Dumpling Days held in early October.

The best time to visit is September, during the Ephrata Fair, the biggest street fair in Pennsylvania.

If you are staying overnight, check out the magnificent historic Smithton Inn located in a beautifully restored 1763 home.

When visiting Ephrata, check out the Green Dragon Farmers Market & Auction, the biggest farmers’ markets in the States, open on Fridays.

Saxonburg was established in 1832 as a German farming colony.  German immigrants F. Carl and John A. Roebling designed Saxonburg’s Main Street to remind them of a quaint, small German hamlet.

Small but big on charm, the town is full of signs of its rich history and German origin. There are 34 historic buildings on Main Street, letting Saxonburg retain so much of its original features and character.

As you browse through the town, you will notice that almost every building has a plaque telling the story of its origins and history.

The best places to learn about Saxonburg’s history are the Saxonburg Museum and a historic general store.

The best time to visit Saxonburg is in August, during the annual carnival.

A great place to spend a few days is the Armstrong Farms B&B located in a beautifully restored 1816 farmhouse.

About 30 miles from Pittsburgh you will find Harmony, a quaint village of about 1000 people founded by the Harmony Society of German Lutheran Separatists in 1804.

Harmony’s charming Landmark District has much of the character of the Old World old German village. It includes over 50 buildings. The town’s historical society offers tours of the very informative Harmony Museum, a wonderfully preserved log house and other interesting spots.

Do not miss a lunch or dinner in the beautifully preserved Victorian mansion that once belonged to the railroad president.

The best time to visit is in July, during the “In Harmony” Heritage Music Festival.

To stay in the spirit of history, check out the Harmony Inn, a charming inn, restaurant and bar in the Harmony historic district. It is located in the wonderfully restored old European-looking house.

In 2013 Lititz was voted America’s coolest small town and for a good reason. Its incredibly charming downtown is full of beautifully restored 200-old houses that are now home to trendy boutiques, cafes and restaurants.

Lititz was founded in 1756 by members of the Moravian Church. It got its name from a castle in Bohemia, not far from the village of Kunvald, where the Bohemian Brethren’s Church was founded in 1457.

Everything in Lititz is ancient but wonderfully restored and preserved. The Lititz Springs Park is a 200-year old town gathering spot.

The Lititz Historical Foundation, which includes the Lititz Museum as well as the Johannes Mueller House, is located in the 1792 Mueller House.

The museum guides are dressed in 18th-century costumes while telling the story of the life of families in the18th century.

Despite its age and origin, there is such vibrancy to Lititz. It is definitively living in the 21st century.

If you wish to stay longer and explore, treat yourself with the stay in Lititz Springs Inn & Spa, a historic inn established in 1764.

Now that we’ve covered the German towns in Pennsylvania, let’s talk a little about the German festivals that you can attend while you’re there.

Oktoberfest is celebrated all over the world – it is so much fun that people everywhere decided that it is something they should have too. A combination of a lot of beer, great traditional German food, folk music and dancing is just irresistible.

Naturally, the towns where there are many folks of German origin do a much better job, or at least a more authentic job. Some Pennsylvania towns go out of the way every year to attract tourists and share with them German traditions.

There is a lot of beer, German and local, German traditional food, competitions, folk dancing and singing, kids’ activities,  races and general fun. Most festivals are free to enter.

Practically every German town in Pennsylvania has its version of Oktoberfest. You can bet your lederhosen that also every brewery has some Oktoberfest fun. So do many churches. Here is the list of just a few towns that you might want to visit during the Oktoberfest.

The Kutztown Folk Festival is the oldest folklife festival in America. For nine days, the festivities draw visitors from all corners of the world. It is entertaining families while at the same time providing a precious glimpse into the traditions of the Pennsylvania Germans, their culture and their way of life.

The festival includes many activities for the kids. During the festival, visitors can visit the quilt auction and sale, the largest of its kind in the States.

German Heritage Festival is organized by the German Society of Pennsylvania and is held in their events hall in Philadelphia.

The festival focuses on celebrating other aspects of German culture, such as recent history including German reunification, the fall of the Berlin Wall, as well as Renaissance and medieval history.

Inevitably, the festival includes food, beer, music, folk dancing, and even a bit of education.

To learn more about this event, check the official website of the German Society of Pennsylvania.

Visiting German towns in Pennsylvania is both entertaining and educational. There is such a strong sense of history and the willingness to preserve the ethnic identity. Of course, the best time to visit any German town is during one of the annual festivals. No better way to learn about people than sharing their food and booze.